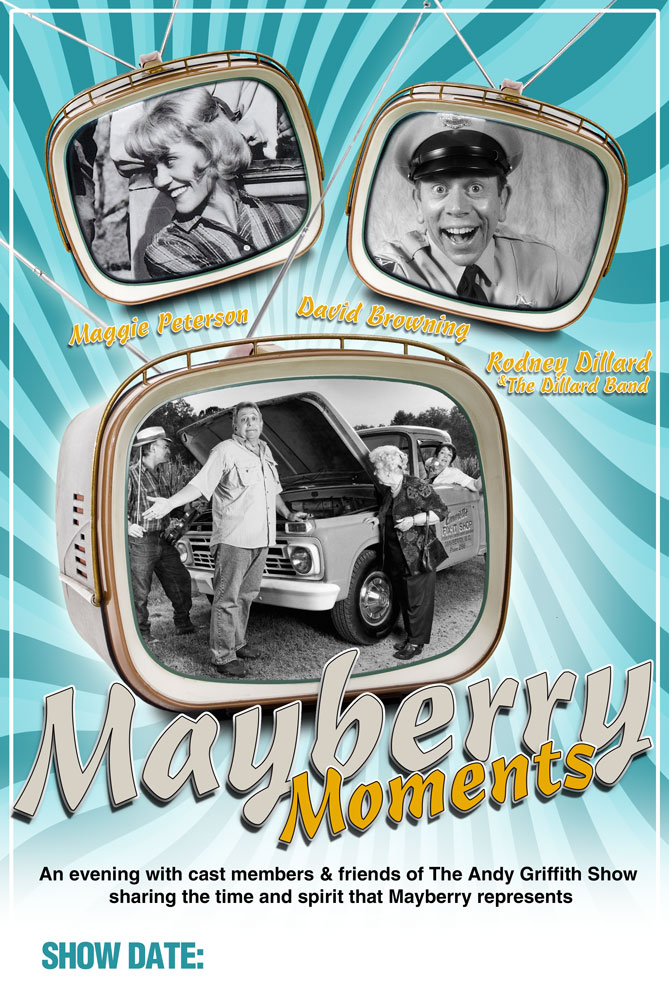 Do you miss the simpler life? Do you ever wish life was more like Mayberry with Barney, Andy, and Opie enjoying a lazy day down by the pond fishing, laughing, and having fun with their friends?

If you are a fan of the Andy Griffith Show you will not want to miss the opportunity to have an Evening in Mayberry with your friends The Mayberry Deputy, musical memories from members of “The Darling Family”, and enjoy the experience of characters from the town ofMayberryand days gone by in a family friendly atmosphere.

You will be transported back in time with the Mayberry Deputy:

“The Mayberry Deputy” is the most noted of David Brownings characters and started in 1988 when a friend of Browning hired the Dillards, known to watchers of “The Andy Griffith Show” as the “Darling boys”, to play bluegrass music inBristol,Tennessee. Browning, who started out in community theatre, put together a “Barney Fife” type act based on a sense of recall (since Browning has seen all the Mayberry shows at one time or another) which made that first performance a hit. At that time, he discovered that he could make a statement as David Browning that was not funny at all but the same statement made in uniform as “The Mayberry Deputy” had audiences falling out of their seats. Browning thinks people enjoy the “Fife” character because it reminds them of a time gone by. “The character is funny and it’s clean entertainment. In the world we live in today, people are searching for their own Mayberry,” he says. “I value this character for what it gives to people today. Laughter and memories.” As a minister with the Baptist Ministerial Association told Browning, “You are ministering to people with your corny jokes and clean humor.”

Take a musical journey with Rodney Dillard and The Dillard Band (aka The Darling Family):

In 1962, THE DILLARDS, who had a new recording contract with Elektra Records, were asked by the producers of The Andy Griffith Show to play a bluegrass-playing family (The Darlings), whose patriarch was to played by popular Hollywood actor Denver Pyle… and to this day THE DILLARDS are seen nearly every day somewhere in the world thanks to the still enormous popularity of The Andy Griffith Show re-runs.

Rodney Dillard wrote and collaborated with others to write such classic songs as “There Is A Time”, “The Darlin’ Boys”, “Ebo Walker”, and “Dooley.”

And last but certainly not least, visit with Maggie Patterson who played Charlene Darling on The Andy Griffith Show.

This event is perfect for Mayberry Days events, Andy Griffith Fan Clubs, County Fairs, Private and Corporate Parties, and anywhere you just want to have fun and remember when life was more relaxed and good moral values prevailed.